Fr. Philip Larrey was invited to a small, private gathering of luminaries at Casina Pio IV in Vatican City. The debate was on how to promote the dignity of work in the face of its hybridization in the digital economy. Many others were the topics taken into consideration and discussed.

“Nor shall we allow the charm of success to seduce us, or we shall be like a foolish traveler who is so distracted by the pleasant meadows through which he is passing that he forgets where he is going”.
(St. Gregory the Great, Homily, 14)

Concept and Theme of the Debate

The massive irruption of automation in the production process, although not a new phenomenon, is advancing with particular intensity in what has been called the Fourth Industrial Revolution, based on the knowledge and information economy and the accelerated transmission of data and digital flows throughout the planet. We are witnessing a transition where, as Pope Francis has pointed out, the phenomena of accelerating the time of productive processes coincide with the phenomena of the irruption of technology as a central piece of social changes.

It is not science fiction. The International Federation of Robotics is predicting that by the end of 2018 there will be 35 million units of robots sharing our domestic life. Their sales will grow at a rate of 30% annually. Of the current 10% share of robots in the world’s manufacturing process, it will grow to no less than 25% in 2025, increasing productivity by 30%, reducing labor costs by one third, and lowering the price by no less than 20% of the most advanced robots.

Between 20 and 50% of current occupations run the risk of being automated in the next decade – according to the somewhat different estimates of the Oxford University, the World Bank, the IDB, the ILO or the OECD. Such a phenomenon is no stranger to increasing inequalities and wage polarization.

The available scientific evidence also indicated that not only the emergence of more “hard” skills among workers will be necessary – in mathematical sciences or programming – but also of more “soft” abilities where empathy, emotional intelligence, intuition, and creativity, are key to the development of services and a new universal network of personal care.

Facing this scenario, one cannot lose sight of the centrality of the human being, within a framework of integral development, which constitutes a fundamental premise when ad-dressing this phenomenon.

This Seminar is inspired by the call of Pope Francis, who invites us to analyze every dimension of this problem based on the inescapable importance of the dignity of human work: A certain way of understanding human life and activity has gone awry, to the serious detriment of the world around us.

Should we not pause and consider this? At this stage, I propose that we focus on the dominant technocratic paradigm and the place human beings and of human action in the world (Laudato Si, 101).

From this perspective, multiple scenarios coexist on the horizon. On one hand, the emergence of new technologies, being put at the service of integral human development, can contribute to improving situations of climate change, health, education, and productivity. On the other, the emergence of robotization and automation phenomena establishes the danger of displacing current jobs, deepening the problem of unemployment, inequality, and hollowing out of our societies, where we see that the increased revenues of technology are being concentrated in the capital side and not on the workers.

This new techno-social inclusion requires the rethinking of the model of still prevailing social order, that should contribute to sustainable solutions instead of deepening, as Pope Francis says, the “throw-away culture”, through technology, particularly serious in the existential peripheries of both the developed and the non-developed countries. The present Seminar intends to tackle these questions from an interdisciplinary perspective, encouraging a holistic, multifaceted and inclusive approach, which incorporates the human dimension as an illuminator of all perspectives of the future of work, in pursuit of the common good and the construction of an integral and sustainable human development. 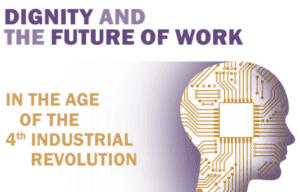 Radio 24: The Church and Artificial Intelligence

"Where the future begins"

As Vatican Reopens, Delos Aligns with Humanity 2.0 Well Being to Implement the Vatican’s First Wellness Installation